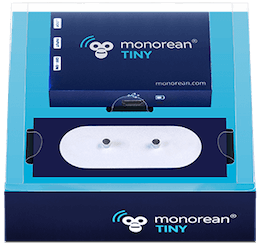 But… what is a spy earpiece?

In a nutshell, it’s a nano spy earpiece. A tiny wireless earpiece. If you have your Monorean unit with you, you’ll notice that it comes with two spy nano earpieces, as shown in the following image:

The spy earpiece will be invisible to everyone around you.

More importantly, Monorean’s spy earpiece will not be heard from the outside. Our Monorean spy earpieces are designed to prevent even the slightest sound from escaping your ear. This can be difficult for your brain to process because you will be hearing the spy earpiece perfectly well. You may begin to have doubts during the exam and wonder if the supervising teacher hears you.

Nobody around you will be able to hear the unseen earpiece.

Install the micro spy earpiece kit before using the Monorean, turn up the volume to maximum, and ask a friend to put his ear next to yours to double-check that he can’t hear anything. This way, you will gain confidence in the spy earpiece Monorean, and you will not be afraid or uncertain during the exam.

Check with a friend to see if he can hear the spy earpiece from outside.

The spy earpiece will not require a battery or any maintenance due to its design—we are only referring to the earpiece; the Monorean control box does have a battery. As a result, it is the world’s most reliable secret spy earpiece and the device that many customers rely on to cheat on their tests.

The volume and sound quality of the Monorean spy earpieces are perfect for establishing a conversation with your partner during the exam. The hidden earpiece must be correctly inserted into your ear for correct installation.

Is it a spy Bluetooth earpiece?

This is a common question and misunderstanding among those looking for a spy Bluetooth earpiece set. Monorean’s Bluetooth control unit and the inductive transmitter are usually the sources of confusion. Specifically the tiny spy earpiece you’d put in your ear will receive the audio signal from its inductive transmitter, the Monorean’s collar, which you’ll wear around your neck. This connection between the spy earpiece and the collar is not Bluetooth but a specific protocol used by Monorean. When we talk about the Bluetooth connection at Monorean, we’re talking about the connection between the control box and your phone.

Is it for spies?

If you are a spy get in touch with us and let us know how you use Monorean as a spy earpiece.